A few weeks ago someone cut the water supply to a town camp on the outskirts of Alice Springs. The ‘camp’ belongs, by ancient practice and by government fiat, to a local clan of Aboriginal people, heirs to a tradition of tenure that goes back beyond white settlement, beyond the dawn of written history. Whitegate is far from how we might imagine a camp, being neither an attractive resort nor a place of refugees. Whitegate Town Camp is not in any sense a place of temporary habitation. It is habitat, it is country. It belongs to the Hayes clan as the clan belongs to Whitegate.

Governments wish to take over the camp, ostensibly to modernise and improve it. They seek to unseat tenure and replace this with long leases. The longest paper lease imaginable would be but momentary in the context and the conception of the Hayes family. Such paper devalues and threatens a connection which is inalienable in nature and beyond secular legal conception.

So someone cut the water supply. Just possibly the government is not responsible. Responsible or not, government could quickly supply water but this has not happened. Nor has repair of the camp’s long defunct solar generation. Whitegate, long a garden of neglect is now a wilderness, occupied by human Australians. Other Australians, notably whitefella writer-artist Rod Moss, supply water and burnable fuel for heating and cooking.

In the present historic moment of human barbarity it is noteworthy that none of the parties to the conflict in the Middle East – not even Assad’s Syria – has ever cut water supplies to its foe. Such an act seems to be beyond human imagining. Except in Alice Springs.

Actions to protest this barbarism will take place in coming days and weeks, actions that are notably harmonious in nature and intent, ‘Aboriginal way.’

How have we fallen so low? 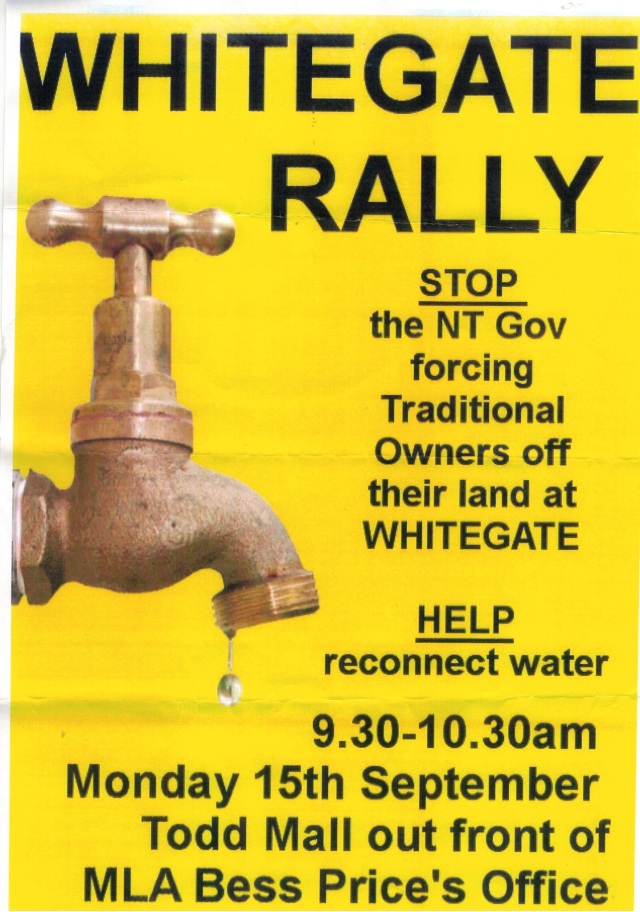 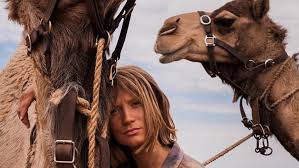 Tiny cinema. Although the tickets are numbered, you can sit where you like, the audience is so sparse.
Opening images of a waif, a child in a yellow dress, walking. You see her from behind as she walks before you. The camera – and your eyes – follow her tracks.
The remainder of the slow movie is much the same: the waif, now of adult years, walks and the watcher follows her tracks. “Tracks” is the name of the movie and the name of Robyn Davidson’s book that preceded it by some decades.

The adult waif informs unbelieving Centralians, “I am going to walk to the ocean.” She speaks with an affect of subdued dourness. There is a tinge of defiance in anticipation of skepticism. The character is defensive, often enough sour. A person alone, she imagines she is independent of approval, of fellowship. Halfway from Alice to the WA coast she discovers, suddenly, violently, her human need. She practically rapes her astonished companion, the awkward photographer whose incursions into her aloneness she resents and finally accepts. Clumsy in his American optimism and belief and cheer, he saves her life by dropping jerry cans of water ahead on her route.

The movie has little dialogue. The silence speaks, the emptiness of the continent speaks. Motifs recur – sand as the tabula rasa of existence, fire as companion, water as vivifier. And the land, “country” in the language of her Aboriginal friends ( she makes a few friends, all of whom exist on the uttermost edges of Australian society. In the unexpected sweetness of the waif’s friends the movie approaches caricature. The traces of sentimentality are forgiven, offset as they are by the central character’s acerbity.)
The land, on the other hand, is eloquent and true. No matter how dramatic the image of hill, of shimmering emptiness, of spinifex, of purpling distant ridges, those images are true. The land – tracked in this way only by Davidson, the lost Leichhardt and Aborigines – is immutably itself.

This viewer, watching Davidson’s traverse, felt the flood of deep knowing, of coming home.
This land is the home of us whitefellas, a home known uniquely to relatively few, characters like Davidson, like Rod Moss, (artist and author of “The Hard Light of Day” and “One Thousand Cuts”). Their knowing is informed by the blackfellas who have shown them their home.

If you’ve missed this movie, don’t worry. Here for five minutes, gone tomorrow, I think it will never disappear. Like Davidson’s book the movie will be sought and valued so long as whitefellas are curious about the land, so long as we ponder our human aloneness.

One Thousand Cuts by Rod Moss

One Thousand Cuts: Life and Art in Central Australia

A book of the dead?

Names are named, a violation of all norms, all practice in both whitefella and blackfella Australia.

Rod does this by virtue of trust, explicit consent, indeed the command of Rod’s friends.

Rod Moss’ singular role – to witness, to record and transmit.

Rod Moss grew up in the country. Well, in the 1950’s the Dandenong Ranges were country-ish. But he was never “in country” until some time well into his long apprenticeship under Edward Arranye Johnson, in and around Alice Springs.

Moss’ first book, “The Hard Light of Day” recounts that apprenticeship, which began with a spontaneous act of neighbourliness and evolved through friendship to become a connection of spiritual father to son. The building and the losing of that bond are the subjects of that first book, winner of the Prime Minister’s Award. It might sound like a large statement that the second book builds on and exceeds the first in its power. It does so by the swelling sorrow of loss after loss after loss, of the weight of pain.

The present volume is unique in the way it illuminates the experience of being “in country” – an opaque expression that whitefellers who work outback hear often from blackfellers. Subtly, delicately, in a characteristic Moss undertone, being ‘in country’ becomes luminous. The light is shed by Moss as he moves around Arranye’s hereditary domain as his named spiritual heir.

Moss gives us birdsong, birdflight as he walks beneath. He breathes the breezes and tempests that flutter or flatten foliage and carry mood or prophecy.

He names and describes the fauna – from grub to reptile to marsupial – that create the country.

Moss does all this in the same manner as in his painting. His colours are florid, his verbal sallies frequently outrageous, his attack fearless. But in all this bravura there’s nothing flash or glib, as Moss walks and paints and photographs the lands of his spiritual patrimony, bearing the loss of spiritual father (and of many brothers and sisters), accruing more and more losses until their weight becomes unbearable.

Most of the losses come abruptly. Each comes with the force of a thump to the solar plexus.

Moss, with his reader at his shoulder, absorbs blow after blow.

At this point we have Moss Agonistes, crying: “It rains in my heart. One drop at a time.”

Moss misses a much anticipated funeral: “I find myself crying on Saturday morning …Though I was sad at the gravesite, it has taken until now, opening the brochure and studying the commemorative words…for me to be sobbing.”