A Book of Verses beneath the Bough,
A Flask of Wine, a Loaf of Bread – and thou Beside me singing in the Wilderness –        And, Wilderness were Paradise enow!

I accepted the invitation to the launch event of ‘Bread, Wine & Thou’ without curiosity. But as the series of emails from the Event Manager mounted I sensed I should look a bit spiffy for the launch. So I wore my English Schoolboy Blazer. The addition of my backpack subtracted from the elegance of my outfit and together with my skullcap ensured I would look quite as odd as usual.

At the last moment I invited a friend, an art impresario held by all to be ineffably elegant.

The security man at the door, a gym giant in Armani, consulted a guest list longer than the Pentateuch. A show of expensive teeth: “Your names, gentlemen?”

“We are both Howard Goldenberg”, I said.

“Thank you sirs. Please take the elevator to the Second Floor.”

A disembodied voice from the rear of the elevator was heard: “Hi Howard”. It took a while to identify our host Yossi (also Zoltan Vinegar) Klein, obscured as he was by a cluster of tall, expensively draped women, mounted on very steep heels. Taller than all others in the lift a wide man with an interesting face stood next to Yossi. He did not speak.

The lift released us into the highly geometric womb of Cox Architecture, a space as inventive and unexpected in its proportions and planes and shapes as Federation Square. I had not previously heard of Cox, but I was given to understand its iconic condition.

Filling the space, throngs of elegant females and stylish males kissed a lot of air as they greeted each other with little shrieks and harmless hugs. I noted my companion and I were not the most expensively dressed persons present. Wine was sipped, quite exquisite looking entrees were served and everyone accepted a copy of ‘Bread, Wine and Thou.’

Eventually Zoltan took a microphone and spoke. For a time no-one noticed, for Yossi is, as his surname suggests, not tall. After a bit all fell silent. He spoke informally, disarmingly, unpretentiously. He said, “I wanted to create a literary magazine on the themes of food, wine and culture.” Those were precisely the words he used when he spoke to me a year earlier in ‘Batch’, the Kiwi coffee shop where he and I had sighted each other without speech over years. On that occasion Yossi said: “I’ve read your writing on Aboriginal Australia. I want you to write a piece on Aboriginal Cuisine for the first Number of ‘Bread, Wine & Thou.’ I can’t pay you.”

I accepted the commission and wrote something and turned up in my blazer and kippah and backpack. It must be clear from the harsh tone of my introductory remarks that I felt uncool, unfamous, outranked by the figures of beauty. But as Yossi spoke all that fell away. This man in his forties spoke of his dream and its fulfilment, the magazine – really a handsome book – that we held in our hands. Yossi opened with a joke about his Jewish mother. It was a good joke and we all laughed and Yossi relaxed. He thanked a legion of first names, burnishing each name with his deep appreciation. As Yossi spoke one hundred and fifty smart people from the uppermost echelons of food and wine stood, arrested. Cynicism and self-consciousness fell away. We were human together as Yossi stood, naked in his feeling. He said he was overcome. His voice cracked with emotion.

Later a Very Great Man accepted the microphone. He sat down and whispered, exercising the powers of greatness and of near-inaudibility over his audience. Just as Howard Goldenberg alone had never heard of Cox Architecture, neither had I recognised the Greatest Chef in the World, the tall wide man of the interesting features who rode the rising elevator at Yossi’s side. 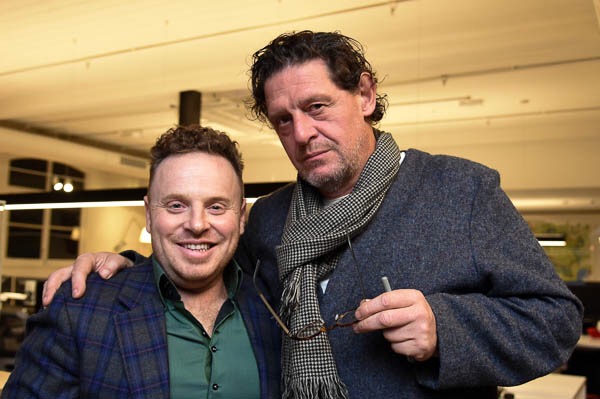 The room worshipped. Upon completing his remarks the man folded Yossi in an embrace that hoisted him from the floor. Evading believers*, he strode from the room, disappearing into the night.

That this personage should have descended to Melbourne for Yossi was felt to be an enormous compliment to our host. As I listened to the chef speak of his career at length and in breadth I felt increasingly the greatness of Yossi. And when you read Yossi’s magazine I think you will feel the same.

Although ‘Bread, Wine & Thou’ is accessible on-line, I urge you, do not go for the virtual book; for modest moneys you can acquire the real volume. Collectors will treasure this, the first edition, a thing of truth and beauty. 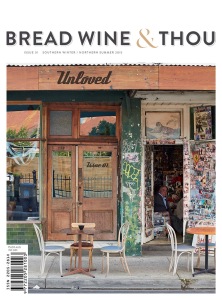 * I stole this lovely phrase whole from Les Murray’s ‘ A Perfectly Ordinary Rainbow’.