Running wearily past the kosher bakery, past the coffee shops, past the kosher providores, past the nearly-kosher food shops, I light upon a face I think I know. The face sits atop a tall figure who wears a black frock-coat, dark side whiskers and a once-black beard. I slow and the man hails me. He thinks he knows me. He speaks: can you come inside and make a minyan?

The man is not alone. Next to him stands another tall man, bearded, not young. Both men wear broad-brimmed black hats. The two wear beseeching looks. They edge closer. With the men standing thus closer than I’d wish, I realise I don’t know either of them. But they have guessed right: I am indeed Jewish and I understand their request. They are one worshipper short of a quorum.

Please, we have a mourner who needs a minyan for kaddish.

I know what this means, I’ve shared the plight of this nameless someone, recently bereaved, who wishes to honour his dead. I tell the men, I haven’t prayed in shule for a long time.  My wife is immunocompromised and I mustn’t bring home a germ.

Long beseeching looks from two quarters. I relent: Alright, as long as there’s space for me to stand at a distance, in the rear.

I follow the men into a side street. They lead me to a door in a nondescript building that I would not have noticed, and I follow the men inside. Through a second doorway, along a passage then up some stairs to a third doorway. The door opens to a wide space beneath a low ceiling. I look around; there’s space here for fifty minyanim, but the worshippers are few. I make my way to the back of this room which I recognise as a synagogue by the Holy Ark located at the distant front. I peer and sight a second Ark. Odd, a puzzle.

I expect my stay to be brief. Kaddish is one of the earliest prayers; I’ll stay, I’ll listen for the Mourner’s Prayer, I’ll join in the responses then sneak out. I’ll still make it home in time for the meal with my wife.

But Kaddish is not soon recited. This group follows a different order of prayer, in which the mourner’s prayer is recited late, not early. What’s more, these guys pray devoutly, with slow deliberation. I settle in for the long haul.

Discreetly I reach for my phone and send my wife a message: Sorry darling, detained in circumstances of unforseen sanctity.

I wait and wait, my mind adrift. From the distance, a man approaches. I don’t know him. He asks, What is your wife’s name in Hebrew?

I understand his purpose. He wishes to offer a public prayer for Annette’s recovery. Touched, I provide the information.  The man now sets before me a tin with a slot in the top into which the charitable congregant might insert a coin. To donate to charity is a mitzvah, a sacred act. The man places a coin next to the tin, to enable this mitzvah. Once again touched, I provide my own coin.  And settle down, happy to wait in this warmbed of piety.

At length we come to the closing psalms. All rise. A voice is heard; Yitgadal ve’yitkadash shmei rabah, magnified and sanctified be the holy Name. The prayer ends and I make for the door. A man, younger than all the rest, strides towards me, a wide smile breaking open his unshaved face. He says, You can’t possibly appreciate the great mitzvah you have done for me today.

What has this story to do with a cantor, or his dog, or for that matter, his wife? Simply this: running home a fortnight later, on precisely the same route, I paused for red lights at a traffic intersection. A musical voice cried: DoffanPaz! One person only calls me by that name, the young cantor, contemporary of my son.  A small dog on a lead looked up at me from beside the cantor’s ankles. Holding the upper end of the lead was a youngish woman who smiled at me.  The cantor introduced me to wife and dog.

For want of any better idea, I recounted the story above. The cantor’s wife smiled again. She said, You should write that story and print it on your blog. I like your stories.

Such a compliment comes to me but rarely. I promised I’d write the story. And there you have it. 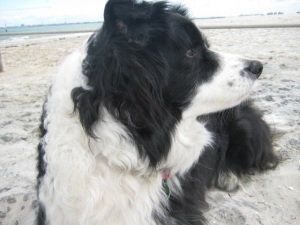 Fidel at the beach on his last day.

Patchett opens her story with, “Two days before my dog Rose died…”* Who of us who has ever loved a dog can resist the urge to read on? Flung into foreknowledge of a death – knowledge humans share, but which animals might be – who knows? – spared, we realise this death is imminent. While many of us imagine we’d welcome such foreknowing of our own end, few could bear it. Patchett, it is clear, feels that burden of knowing.

Then there’s the dog’s name, Rose: this dog is particular. She has an owner, a name giver. Giving a name is an act of appropriation, literally a claim of belonging. Rose belongs to Ann. Sahara belonged to my brother Dennis; and Fidel belonged to my son-in-law Pablo. And, to our surprise, a widening circle of others.

My firstborn brother spent most of his last decade as the sole resident in a family sized dwelling. A gregarious, family-minded man, his loneliness would have been bleak without Sahara. To those who did not love her, Sahara, was completely unlovable, too small, too low slung, raucous and aggressive; she was in addition a sneaking, nasty, opportunistic biter. To Dennis alone was she cherished; blind to her antisocial nature, her repellent effect on all creatures on two legs or four, Dennis pampered her. He loved Sahara. She was his housemate, his friend, his nearest relative.

Happily for Dennis he never saw Sahara’s last days. After he died, one of his friends materialised in our house of mourning and volunteered to take her in. Relieved of a most undesired heirloom, we seldom speak of her. She lives on, however, under her own name, between the covers of my novel ”Carrots and Jaffas”, in which she functions as an unexpected redeemer. My fear is she might be alive somewhere in the flesh. A roar, a blur, a quick bite, sudden blood, quicker flight, you’ll recognise Sahara by her toothmarks.

By any standard Fidel was a Border Collie gentleman of refined habits. He growled only when a stranger ventured too close to the latest newborn of his household; he barked only at the one great hound to invade his territory outside Alma Espresso; he was quite useless as a watchdog. Fidel’s sole lapse of etiquette was his habitual piddling on my mother’s loungeroom carpet, but we excused that as the imperative of territory.

Fidel loved to run. I loved to run. Long after my running companions fell away to ruined knees or rescued marriages, Fidel kept me company on long lonely early morning runs. Young women smiled at me, my maleness forgiven in the company of Fidel.
Fidel was first dog across the line in the Traralgon Marathon of 1998. He was photographed smiling at my side with his medal around his neck. The officials were not to know he’d travelled some of those 42.185 kilometres – unwillingly and under protest – in my daughter’s car.

Fidel parted with his testes without complaint, he raised three small boys and won the hearts of widening circles of kin with his never ending grin and his always sweet breath. Like all his bottom sniffing kind Fidel seemed immune to odour. He’d keep me company when I was seated on the loo. Once in that small room he ventured forward, making mistaken fellatious overtures. Fidel and I were close but I drew the line here.

One day Fidel seemed tired, the next day apathetic; the third day he was rescued by surgery and transfusion (at the hands of his loving vet-in-law) from death by catastrophic internal haemorrhage. The vet-in-law confided he had had incurable cancer. Six weeks later my wife and I said our goodbyes to Fidel – my jowls quiver and my lower lip trembles as I recall it – at the seaside, his happiest hunting grounds where he was wont ever to chase seagulls into mocking flight. We embraced him and whispered last words. We knew what we knew; we wondered what Fidel knew? Not for the first time I kissed him.

Ann Patchett won the Orange Prize and a Pulitzer for ‘Bel Canto’. She won me first with a small booklet titled ‘The Bookshop Strikes Back’ (Bloomsbury, 2013), a safe enough speculative buy at $2.50, handsomely rewarding.

In her remarkable book, “This is the Story of a Happy Marriage”, Ann Patchett describes the passing of Rose. Rose was small, lap-sized, not a real dog to love and run a marathon with. From her opening phrase Patchett won me.

After Rose dies, Patchett writes: “I came to realize…there was between me and every person I had ever loved some element of separation…arguments and disappointments…over time people break apart, no matter how enormous the love…and it is through the breaking and the reconciliation, the love and the doubting of love, the judgment and then the coming together again, that we find our own identity and define our relationships.
Except…I had never broken from Rose…”

Patchett recruited me into her love, convinced me, changed me, enlarged my understanding.
What more can we ask of a writer?

*This must be the most arresting start since Annie Proulx’ “Postcards”, which opens with the protagonist’s realisation that the person with whom he has – one breath past – shared an unspecified se xual act has died in that act.