Before I answered the calI I’d never heard of Trundle. When I googled it I might have giggled. A town of six hundred souls, Trundle boasts the second-widest main street in New South Wales, and its pub boasts the longest verandah in the state. I didn’t giggle. I held my mirth.

All morning I chased my tail in the big city, I caught my plane, I recited the Traveller’s Prayer and I breathed out.

It was dark when the plane dropped me at Dubbo. The bloke in the burger shop near the airport added up my bill for one bottle of iced coffee, one bottle of putative lemon. I pulled out a ten-dollar note.

Something was different: the man didn’t scan the bottles. He did his calculation in his head. Ten dollars fifty, he said. The man looked up and saw my money. Ten bucks, he said. I thanked him. You’ll know where to come next time, he said. I said I will. I meant it.

I took the shorter route to from Dubbo to Trundle. I didn’t realise the shorter route would take me by dirt roads for much of the distance. Over the two hours on those back roads I startled a few kangaroos but encountered no vehicle passing in either direction. The dark of Dubbo was darker out there in the quietness and the road signs were unlit. I took a wrong turning and got lost. I got unlost and entered Trundle. The wide main street was brightly lit. Nothing moved.

At the hospital I asked the nurse, can you direct me to my quarters? No, she said, I’ll take you. Follow me. She jumped into her car, I into mine and we drove through the dark to a house that wasn’t brick. We bought this to let to visitors, she said.  We’ve spent seven years renovating it. The nurse opened the front door and I stepped into the perfumed past. Motel deodorant swamped all olfaction. The nurse pulled a switch revealing animals that greeted me from every side. A steel sheep and a steel cow stood at either side of the front door. In the lobby a crocheted mouse in a lilac dress stood knee-high by a bedroom door. A second mouse in white stood guard at the second bedroom. A third mouse in soft pink waited by the third bedroom. Ladies’ hats hanged from hooks, trailing ribbons of many hues. A large painting of Trundle’s main thoroughfare (famed for its width) stood on the loungeroom floor. The streetscape peeped brilliantly from behind a swath of brown paper upon which someone had written, apologetically, Sorry, Not For Sale.

Flowers fashioned of bright fabrics overflowed from waterless vases in every room. In the kitchen, mugs of colourful ceramic spilled from every cupboard.

Décor surrounded me, pressing in from every side. Furnishings that dated backwards in time from the year 1950 overflowed in every room. Here was the Australian rural past in glowing abundance.

Tucked behind a bedroom door, in the depths of a very large leather hatbox, sat a felt hat in sky blue. An emphatic navy ribbon decorated the hat. Above all stood a framed text, written in smart neo-gothic. Its title read, The Story Of a Hat. The story told how that hat was made by hand for a wedding at a period when no woman went to church unhatted or ungloved. It was a matter of respect. The story, unsigned, ended with the words, This hatbox belonged to my grandfather.

Two thoughts registered: This house was, not renovated but de-novated – a home to memory. You would not sneer at sincerity. And kitsch would not be the word; this was love. 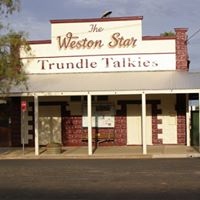 In the main street shopfronts stood beneath brave signage. Two of every three shops were closed. A sign read, Trundle Talkies. Excited, I raced across the road to check the movie times. I was too late by thirty years. I read the signage above the garage. Pontiac, Plymouth – those makes that ferried my family across the state in the 1950’s – now extinct. 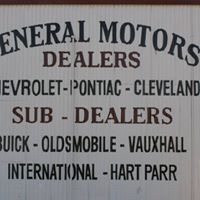 A card in one shop window read, closed until further notice, ill child. I saw five clothing shops. The stock seemed to be the same in all five. Three were closed, one with a notice advising, Yvonne comes Thursdays and Mondays, 11.00 to 3.00.

I went to the first of the open shops to buy undies. The child in charge was sorry, they had none. I might try the Op Shop two doors down. No undies there either, but I noted the stock in the Op Shop looked the same as in its competitors.

Two doors down was the office of the Annual Abba Festival. Thousands attend. They put on a special train from Sydney. Everyone dresses up as one Abba person or another. Great are the festivities.

I doctored in Trumble for three days. Most patients were farmers, heirs to farms worked by their families for generations. Many of these people were older than I. None complained when an emergency elsewhere in the hospital detained me. If I said, sorry to keep you waiting, they looked mystified, then assured me it didn’t matter.

I thought about this. These people worked the farm from sunup to sundown. There was always work to do. But they had time to spare for other people. They’d survived the long cycles of dearth and plenty. In the present dry – the worst in memory – people were feeding their stock by hand. They’d stopped planting crops, waiting for the rains. They knew time differently from my patients in the centre of the great city.

My principal in the practice spoke of an epidemic of depression, of farmers dying of sadness. Others would be forced from the land, to walk away from the family farm. It occurred to me to ask, where are the Aboriginal people? Not here. We’re not on a river. And there’s no community in Parkes either – no river there. But strong communities in Dubbo and Forbes. They’re on rivers.

My three days completed I rose at 2.45 am to drive to Dubbo to catch the earliest flight to the city. I drove down that wide, wide street, built for the bullock trains to do their long u-turn.

I hurried through the dark, eyes wide for suicidal kangaroos. I arrived at the airport and checked in. I checked my phone: I’d arrived on time. Chasing my tail again.

The maxim printed above was authored by Paul Jarrett, my friend in Phoenix. This ancient Phoenician is longer in the tooth than a sabre-tooth tiger and keen as mustard in the brain department. He locates himself as somewhat to the right of Barry Goldwater, an American conservative to make today’s Tea Partiers blush pink in comparison.

The Jarrett advice rings painfully true, not just of lottery tickets, but of gambling generally. I have seen lives ruined by the winning of a lottery; lives lost to suicide by failure to win at the track, the casino, the local gambling shop. I have known a stockbroker, a man of conscience and long experience, his retirement ruined by the depressive illness that followed losses – not his own, his clients’ – who gambled on the Exchange. I have seen desperate ugg-booted women in curlers, seated joylessly playing poker machines at 6.00 am.

Here’s a farmer that hanged himself on expectation of plenty…*

I am in short, that miserable, un-australian being, a wowser. Like Paul Jarrett I was never very good at Math…

*From the porter scene in Macbeth

I wrote this piece about Lucy, a paramedic, that appears in today’s The Sunday Age newspaper.

This was one of Dad’s stories that made me when I was small – probably made my brothers and my sister too:

Dad said: “We lived in North Carlton, where all the Jews lived. We were all poor. Even after the Depression, when we weren’t so poor we never forgot the poor times.

“My Father – your Papa – told us a story about King and Godfree. Papa went there once in, the hard times, to buy food.

The grocer said: What can I get you, Mr. Goldenberg?

A pound of flour.

The grocer weighed the spuds and the flour.

What else, Mr. Goldenberg?

That’s all. Nothing else thanks.

What do you mean?

No thanks Mr. King.

The grocer left the counter for a moment. He came back and placed a dozen eggs and a quart of milk on the counter.

Papa shook his head. No Mr. King, I won’t take those. I’ll take what I can pay for.

You take them now Mr. Goldenberg. You’ll pay for them when you can.

Papa never forgot that. From that day he always shopped at King and Godfree.”