Michael Benjamin Komesaroff was a conspicuous proletarian classmate of mine during our later years at Scopus (1963). He had a lived political ideology, like other Komesaroffs before him, an indivisible loyalty to Jewishness and to his country of citizenship. I recall his vernacular speech deafening us classmates in his espousal of Labor politics. We called him Kommo; he was a social democrat before most of us knew the term. Those same politics marked the generation of his immediate ancestors, and brought them to the attention of ASIO. At the time Lenin was preaching international revolution, a doctrine that unsettled Australia’s conservatives. Here were the Komesaroffs, newly arrived from that revolutionary hotbed. Where did their loyalties lie? ASIO became very interested in them, and now their descendant, with a career in international journalism behind him, investigates the investigators in a new book. “Reds Under the Beds” is the result.

“Reds Under the Beds” describes the abiding interest of Australia’s intelligence community in a family who had immigrated in the early decades of the Twentieth Century.  The author’s love and respect for those ancestors match his feelings for Australia. His meticulous research informs this account of a group whose hallmark was loyalty. The Komesaroffs were loyal Jews who became loyal citizens of Australia. Jewish loyalty mandated their love of Zion and their opposition to fascism, while loyalty to the country of adoption saw them acknowledged as exemplary citizens. Somehow ASIO became all too interested in the Jewish concerns of the Komesaroffs and quite blind to their lives as citizens.

Michael Komesaroff writes his family’s story dispassionately, in clear and clean prose. His analysis of the political tides and times is  revelation, as is his understanding of the contest for middle Australia between Social Democrats and Conservatives. With a calm that is unusual he identifies prevailing anti-semitic attitudes without inflating it beyond its true dimensions. Most topically, Komesaroff shows us how Australians of the most ordinary loyalty can come under pervading suspicion and investigation by Intelligence organisations. In our times, when mistrust of the citizenry is translated into something of a growth industry, a poised and intelligent balance is needed between the community’s needs of security and of community. In the case of these ‘Reds under the Beds’, ASIO emerges, showing limited intelligence.

“Reds Under the Beds” is published by Hybrid Publishers and is available from most booksellers and Amazon. Further details of the book are contained on the Amazon website (here).

As outlined in the flyer, I have the pleasure of launching the book at 4:00 pm on Sunday 15 July at Glen Huntly Park Function Room, Glen Huntly Park, corner of Neerim and Booran Roads. 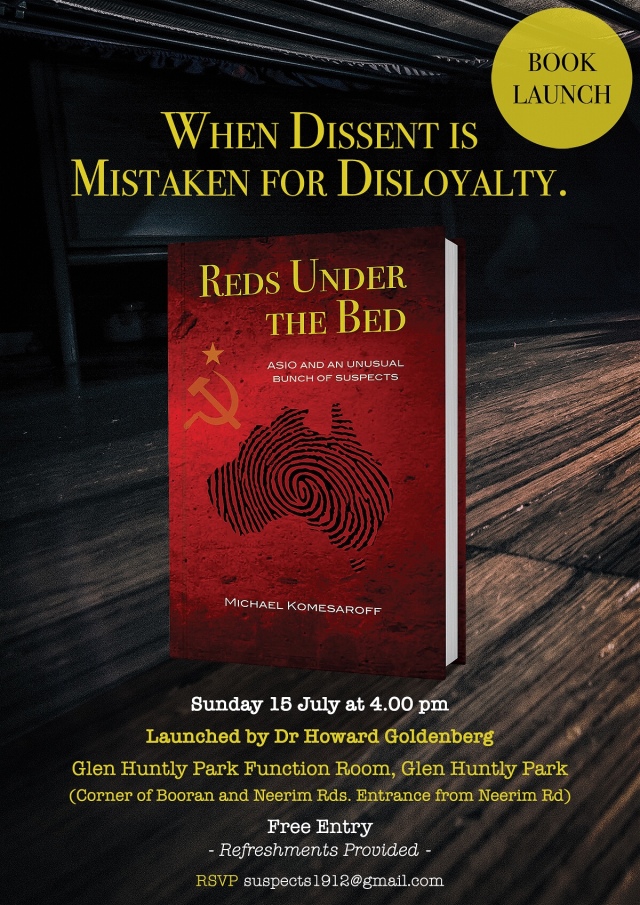