We are saying goodbye to Mannie today.

Mannie, whose loved ones weep today.

Manny, one sole man, who ran and ran.

Mannie whose race is finally run.

Mannie was true to his roots.

Those roots brought forth shoots who live and grow and bear fruit. The shoots are the children of Mannie and Demitra. When the young couple named their shoots they were visited by the muses: they named their children not Lucy but Alithea; not Robert but Panayioti; not Susan but Leni. The names carry meaning, love of course, and destiny.

Mannie did not give his children easy names, Aussie names, names to hide behind. He gave them what he received – a culture, a tradition, a history of beauty and pride.

Everyone knows of the feats of Manuel Karageorgiou, Mannie, who ran the first Melbourne Marathon and the second and the third and …

Manny was one of the eight. Eight glorious souls who had lived and toiled and wrought in every Melbourne Marathon from the first to the latest. Forty consecutive marathons. Foolish.

I want to suggest to the non-runner reader what Mannie’s folly entailed. Physiologists have identified an end point of energy. And adult human can run about 32 kilometres, then energy reserves are exhausted. After that the runner faces a wall. The runner digs into a core of belief and runs a further step. There remain ten kilometres, ten thousand steps. The runner digs further, drawing on pride, on mystic need, on love, on some truth in the soul. And the runner runs on, runs through a wrecked body. The runner now is pure spirit.

And then there are the final, agonising, ecstatic one hundred and eighty steps. The runner crosses the line and then the race is run.

A few paragraphs ago I began listing Mannie’s Melbourne Marathons. I stopped after three. Were I merely to list the forty your eyes would glaze, your mind would wilt, you’d leave the track that Mannie and the Eight would not leave.

My Greek friend always dreamed of running the Athens Marathon, a homecoming profound beyond imagining. But Mannie never allowed himself to run Athens because it clashed with Melbourne. And Mannie owed the event his presence, his being. Mannie would not desert his friends of the Eight.

I’ll reveal here some of Mannie’s medical history, normally a forbidden act. But Mannie as we know was not a normal man:

While on an early morning training run before the Melbourne Marathon a few years ago I sensed a solid bulk of human flesh approaching in the gloom. The flesh developed a face and the face shot a me smile through the mist. Mannie recognised me first.

Here he was, I knew, fresh from his bone marrow transplant. Preposterous – Mannie understood – to run a marathon with that illness, outrageous, with those therapies. He’d visited me the previous week to talk about running again. ‘The specialist says I shouldn’t run. Howard, is he right?’

‘I suppose he must be Mannie. One fall and your bones can break, so easily.’

It was a broken rib, cancerous, we both recalled, that uncovered Mannie’s diagnosis.

Mannie looked at me. Mannie knew I was no cancer expert, just a runner. His look was a plea; he wanted a reprieve.

I said I could tell him what was the safest course. But then I told him about my mother:’Late in Mum’s life her health was shattered by strokes, but the spirit of the wanderer that had taken her to the bright and the dark ends of the globe, burned still. My sister and I were going to fly to Uluru. Mum wanted to come. She said, “If I stay at home I’ll die one day anyhow. I’d sooner go and see and find and know; and if I die doing it, I’ll have seen the rock. That would still be a good deal for me.” Mannie thanked me and left.  You know what Mannie decided.

I referred before to Mannie’s folly. I’ve seen marathons. I’ve seen and felt the interest and the indifference of spectators. I’ve seen the fellowship of running. I’ve felt the loneliness of the Malta plains. I’ve seen the splendour and I’ve seen the blackness: both were present that day in Boston. I thought I had seen it all, until I ran a marathon with Mannie. An entourage ambushed him – a son, a brother, a younger leviathan figure, a clutch of attractive young women (I wondered who they were. I learned they were girlfriends of nephews of Mannie.) This phalanx of nonrunners surrounded Mannie, they spread widely across the road. Mannie was one runner among thousands, but he alone moved in this stream of flesh aching with love. They ran and ran alongside their hero – the older man, the fat man, the glamorous girls. They tasted fatigue but they would not leave him, not until he reached the next plank in Mannie’s platform of love; and this, of course, was Demitra. ‘DEM!’, he cried, and they kissed. And Demitra held their grandbaby. Mannie stopped. He held that chubby child close and inhaled her. And then he ran on.

I have written of a human, a person. I have written of him chiefly as the operator of a pair of legs. A person is more than that. More than a disease, more than his diagnosis. But in Mannie the runner I see the human and his fate. This man faced Nemesis and outran him for year after year. And when at last – five kilometres into the fortieth marathon, after Mannie stumbled and fell, then arose bloodied – it was Demitra who stepped from the footpath, who took his hand and led him away.

“..Old age hath yet his honour and his toil;

Death closes all: but something ere the end,

Some work of noble note, may yet be done…”

Farewell, Mannie. We will not see your like again. 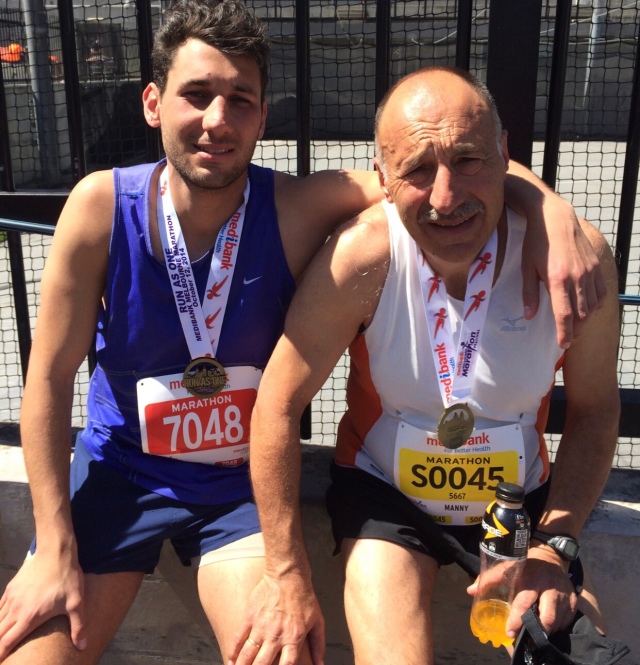 Mannie’s family have let it be known they don’t want floral tributes to mannie. They’d prefer us to donate to the Myeloma Foundation in his memory. And of course, in his honour.

12 thoughts on “Goodbye My Friend”