Ten years ago an extremely distant relative by marriage, an aged veteran of WWII, commanded me to send a copy of my first book to his wartime senior officer, who became his enduring friend. The book in question (‘My Father’s Compass’, Hybrid, 2007) tells of my relationship with my father, a righteous and loving man who has been my lifelong inspiration. The relative said, ‘Paul will enjoy that book.’

So I obeyed. Paul read my book and enjoyed becoming acquainted with my father, a man like Paul, of unwavering principle.

A correspondence followed. Seven emails a day informed me of Paul’s take on the news. He disapproved of Obama, and of his successor as President; much of Islam (as portrayed in the popular press) offended him as did illegal immigrants. He disapproved of gun control measures (‘if you take weapons away from the good people, we’ll be defenceless against the bad people’). He had a close relationship with God and the Republican cause. He loved humanity broadly. He loved his family with a proud particularity, and he nurtured tenderly the numerous stray cats and partially tame birds who adopted him.

My email feed from Phoenix Arizona included Paul’s never-dull reports on the weather – its extremity and its beauty – on mushroom toxicology, on rattlesnake behaviour and on the conduct of those human snakes who conducted relentless scamming campaigns aimed to impoverish him. He loathed millionaire TV evangelists. He warned Israel’s enemies that ‘Jews will not go quietly to the showers again’. He warned the dictator of North Korea of the obliteration of his country if he started military adventures against the USA. Paul loved his country and he suffered the fiercest extremes of spiritual agony when faced with the horrifying (to him) electoral choice between Clinton and her opponent. While many found that choice troubling, it distressed Paul, so seriously did he take his duties as a citizen.

In due course I met Paul in the flesh, enjoying his company in the house of his daughter Ann. Ann drove us to the sequoia redwoods nearby her California home, where she took a photo of those ancient trees towering over her ancient father, who in turn towered over me. 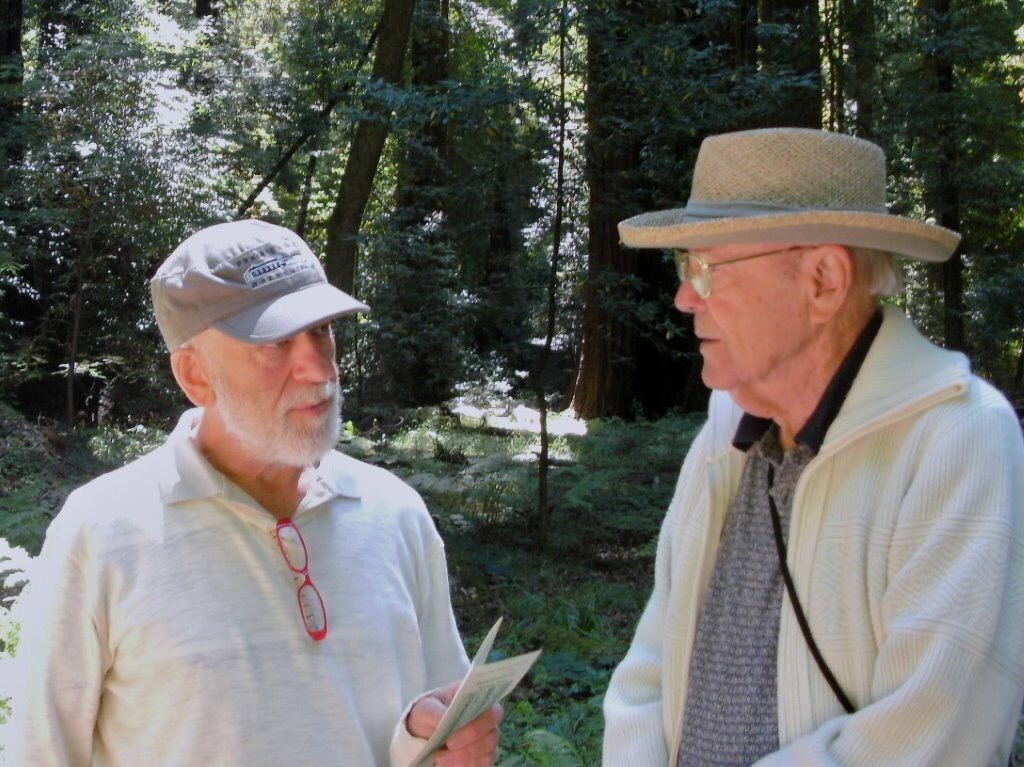 On a later trip I visited Paul in his Phoenix home where we sat on the porch enjoying the desert sun and where Paul smoked his constitutional cigar. I promised myself I’d visit again in February 2019 when Paul would turn one hundred.

A couple of weekends ago the emails from Phoenix came abruptly to a halt. Then the following appeared on my screen:

On Sunday, November 7th while Paul was getting ready to attend church, he suffered a pretty severe TIA, transient ischemic attack, which has put him under the weather. He has been having some difficulties in his daily routine so we have all been with him 24/7 until he recuperates.

Thanks for your thoughts and prayers and I know he’ll be back on the computer as soon as he can. He loves emails, so keep them coming!

I wrote to John, with my hopes and prayers for his Dad’s health.

He had showered and was preparing to drive to Church this past Sunday morning when he became impacted by dizziness and faintness… He’s also “put up” with a heart condition that brought bouts of angina at times and he has been having these TIA’s for several years ongoing…  He has a stricture where his aorta connects to the main part of his heart and was told he was not a candidate for a stint procedure… So, he soldiered on some more…

He had one “spell” (as my sister call’s it) about 3 weeks ago when she was visiting that took 3 or 4 days to show improvement after being 99% speechless for several hours.  About 1 year ago, he was unable to speak while doing business at the banking teller window…  He was getting Christmas gift envelopes for his children and grandchildren.  He tried to type emails Sunday evening but was unable to make is fingers hit the proper keys… The speech problem impacts his typing too it seems… He hears with difficulty (as has been his hearing deficiency for years now) but understands all that he is able to capture in terms of sounds.

He might recover from this most recent bout but each time, full or even partial recovery is becoming increasingly difficult. We are all praying that he improve to the extent he can enjoy his patio, cigars and cats again!  He is extremely weak in his legs/torso and has been impacted by some by minor paralysis in his right hand and arm too…

Fifteen days have passed since Paul’s son wrote. Fifteen days of email silence. In the silence I picture Paul suddenly, taken suddenly mute at the bank teller’s window, as he tries to buy gift envelopes for his children and grandchildren.

2 thoughts on “Writing into the Silence”