He stands in the mall, an oddly striking figure. His right foot perches before the left, the heel resting on pavement, the sole raised at angle of forty-five degrees to the horizontal. The man looks as if captured in the act of tapping a foot to music. But the foot does not stray from its perch; and where is the music? Listen carefully and you hear a sighing, a musical sound in time with his breathing. Look closely: held between fine fingers that protrude from fingerless grey woollen gloves is a silver harmonica. The man is playing. Or is he merely respiring – breathing in, breathing out through the instrument?  My friend Rod is a local. He traverses the mall every day.  ‘I don’t think he’s playing music’, says Rod. ‘Or if he is, it’s one single note.’


The man’s appearance is unusual. His hat is of classic design, early American Puritan I guess. Johnny Appleseed's name that comes unaccountably to mind. That old apple-planting, godbothering American pioneer, an early conservationist, a beloved and mythic figure in his own lifetime and since. Doubtless it's the headgear: the high peak of the hat is a tall cone, the brim a wide downsloping verandah . The colours of the felt shift subtly from mouse-grey to a junior navy blue to a peacock green. The effect strikes me as quite beautiful. The man himself is slim and he stands a full head taller than I. The hair of his head and his beard is turning from jet to silver. He looks as if he might command a fleet or conduct an orchestra.


The man stands singularly alone. I mean not simply that he is unaccompanied, nor that he neither receives nor seems to need notice: I mean there is in his solitude a seeming self-sufficiency that contradicts his act of his busking. For surely he is busking, this man who stands and plays music in a public place. But if he is busking, where is a receptacle for coins or notes? No cup or box or instrument case on the pavement before him, no hat either. That rainbow remains on his head. I stand at a distance, observing, wondering. I approach and wait for a hiatus in the sounds that emerge from his instrument. There is no pause. Neither is there a meeting of eyes. I step a little closer, not close enough to offend, but too close to ignore. I stand in silence while the musician plays on in near silence. I have time sufficient to study the sounds he makes. I hear more than Rod’s single note, at least three. The sounds flow and merge like the hues of his hat. While I wait I admire the close-fitting leather vest that clings to his lean frame. At length, a pause. I ask, ‘Do you mind if I speak to you?’
The man looks down towards me, an expression without a smile. He speaks: ‘For what purpose?’
‘I am puzzled. I see you standing in this public place, you play your instrument as one might who is busking. Yet you provide no container for a passer-by to show appreciation…’
‘Yes. ‘
‘Would the offer of money offend?’
‘No.’
‘But you do not encourage it.’
‘Nor discourage. If a person wishes to show appreciation, a conversation must first take place. As is occurring at present.’
The man’s old-fashioned formality has seduced me into unconscious imitation.
‘Would you object to telling me your name?’
‘Possibly not. What is yours?’
“Howard.’
‘Good morning, Howard. My name is Johann.’ 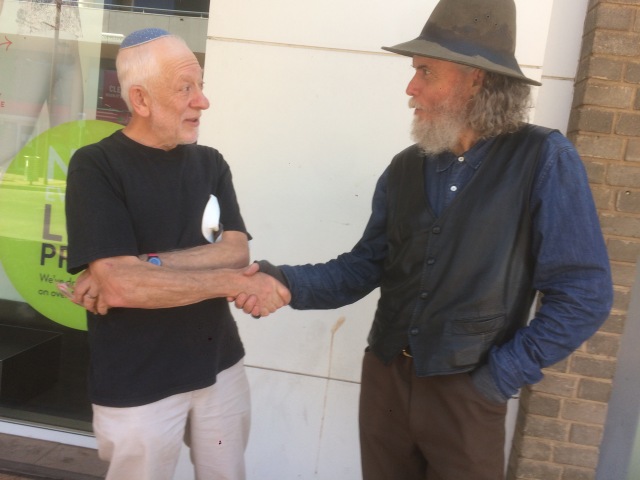 He pronounces it unexpectedly as Jo-Han.
‘Isn’t it really Yo-hahn.’
‘Yo-hahn, yes.
‘Dutch?’
‘Yes.’ A smile, good teeth, (a little yellowed) emerge from the shrubbery of his upper lip. It’s a nice smile. ‘My parents, from the Netherlands.’
‘Do you live in Alice, Johann?’
‘Yes. For five winters now.’
‘And before that?’
‘I wandered. I carried my swag from place to place, I slept where I chose, under the stars. I came to Alice Springs and it was good place and I stayed. I do not expect to find a better. I do not need a better.’
‘Do you play here every day, Johann?’
‘It provides my breakfast. I meet here interesting people from many places. I enjoy conversation. As is occurring at present.’


Johann accepts some money gravely. And no, he has no objection to being photographed or filmed.