A man accosts me in the darkened lobby of the hospital in the small town where I’m working. ‘Shalom’, he says.
He gropes inside the front of his shirt and pulls out a silver magen david.
‘Shalom aleichem’, says I.
We swap names. For the purposes of this story, his name is Federico.
Federico looks not ancient, not brand new. He’s tall, compact, has an olive complexion and he bends forward as he speaks. His accent is not Australian-made. His English is arrhythmic.

‘What are you doing In Nyngan, Federico?’
‘I live here. Thirteen years now.’
‘Will you tell me your story?’
He does so.

Before I repeat Federico’s story, allow me orient you to the remote, obscure town of Nyngan by referring you to my recent blog post (Nyngan on the Bogan).

Back to Federico: ‘I come from Mozambique. You know, was colony of Portugal. In 1976 Salazar dies. A bastard, Salazar. Like Franco, not a Jew-lover. Both of them, friends of Mussolini. Salazar dies, the blacks start to revolt and Portugal says, OK, we leave. They just run away, no negotiation, no transition. Then starts the war. A civil war. Massacres, the usual thing. First the Portuguese come to the coast in sixteenth century, they set up the port, Lorenzo Marques, a stopping place to their bits of empire in India. They go to India for the spices. They build their African colony by sending all their criminals, convicts. Like Australia. Like Australia, the same, those convicts become successful and they are comfortable. Portugal comes, butchers the blacks, in 1977 they go, then more massacres. Africa.

A nice place actually, Mozambique – for a Portuguese. But not now, not in ’77. In ’77, I know if I stay I will die. I leave my birthplace. My barmitzvah was there. In the synagogue, in Lorenzo Marques. Now I am in Portugal, a refugee, among all the refugees – from Mozambique, from Timor, from all places that Portugal runs away from. I cannot go back to Lorenzo Marques. Another Jewish refugee. History’s old story.


No-one can go to LM now. It does not exist: now the town is Maputo. And the big statue of that old colonist, Lorenzo Marques, they tear it down. Now in that square is a sculpture of a bird.


My grand-grandfather comes from Portugal to Mozambique. Now my family, all gone, all scattered. Six brothers and sisters, some in London, some in South Africa, one sister in Norway. She was the last one of the six I have seen. She used to visit me here in Nyngan, every winter of Norway. Last time I visited her was before five years. That last time, in Norway. Family all scattered. The Jewish story. Always the same. You know.


You want to hear how I come to Australia? Things happen for a reason. There is a meaning. I study history, I research. There is a reason. I believe that. So in Portugal I am safe. My grand-grandfather was Portuguese so I have citizenship. But no future, a refugee. The Jewish story. Always the same. So I wander. I work in Vancouver, I leave, my visa has finished. I work in South Africa. Many Jewish there. I work In London, in Finchley Road. Again many Jewish. I work in Norway. In between visas I work on cruise ships. Eight years on cruise ships; you don’t need a visa. On cruise ships there are Jewish. Also Barbados, every one old, everyone rich. Some Jews there too. I work In Korea. That’s where the miracle happens that brings me to Australia.


One year before Korea in Vancouver I apply for Australia. A Mozambiquean friend in Australia advises me: be careful what you tell them when you apply in the Embassy. Don’t say the wrong thing. So the embassy woman, she asks me what I will do – she means work – in Australia. I say I have qualification. I tell her I am chef. I don’t know what answer is the right answer. I know from my friend they don’t tell you what they want and what they do not want, but if you say wrong, they close the door. I answer, I pay the application. It will take a few months, the application, she tells me. Another cruise. And another. A letter arrives from Ottawa. The letter is from Australian High Commission in Ottawa. I have immigration visa. But no money. To come to Australia I must pay. So I wander on cruises and I work and I save. And I know I will leave the ships one day and I will settle and all my friends on the ship, always they will be slaves. I pay for a flight from Korea to Australia. Maybe three hundred American dollars, I go to the airline office to pick up ticket, the day before my flight. But it is a public holiday in Korea. Office is closed. I have paid, I have visa, I have no ticket. My flight is tomorrow. Here happens the miracle. I put my face against the window. I see people inside, cleaning. I make with fingers – come here please – come to window, I must ask. They come, but no-one speak English. They find someone. I tell him I need my ticket, I point to the office where the woman sold me the ticket, they go in, bring the woman out. A miracle. A public holiday, in Korea, the office is closed but I have my ticket. Things happen for a reason, I believe it.

In Australia, in Sydney, I work in Bondi Junction. Again many Jewish. I am there some years. I marry there, my wife have lymphoma before we meet. Then she is cured and we marry. Have children. Since thirteen years I am in Nyngan. I come here, I come here for the peace. I work at the pub as chef. Then the manager closes the kitchen, leaves Nyngan, manages from the city. I have no job, but things happen for a reason. I believe that. I sit in this coffee shop and the manager of the biggest hotel comes in, says, Hello Federico. Come work for me.


Small town, you know, everyone knows everyone. Good people here. My wife gets a second cancer. We drive to Dubbo, we drive to Sydney, we drive, drive. Always long drives, costs hundreds of dollars petrol. And the people of Nyngan collect money for our travel. Good people in Nyngan. Nothing happens without a reason. But my son, he’s grown up, I tell him – get out of Nyngan, no future for you here, go see the world, go build your future. You know I believe.


Will you do me a favour, Howard? I want for my doorpost the Jewish sign, for the doorpost, you know. I google but I don’t just buy. Has to be real, you. Needs the writing inside, not just the box . 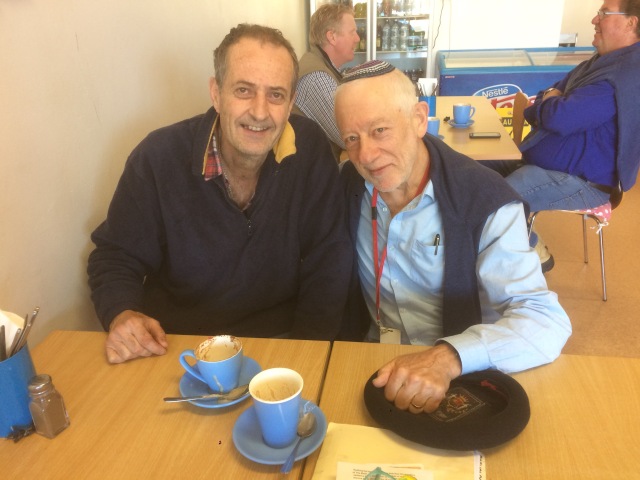 5 thoughts on “From Laurenzo Marques to Nyngan on Bogan”