In late 1969 the new doctor emerges half-baked from his progressive medical school. After graduation he spends three years in residence in major hospitals. He emerges from that great womb and enters family practice, feeling underdone still. But he blazes into his new work in a rural general with a few guiding verities. He will not create distance from his patients. He will not wear a white coat. He will wear bright socks, a signal to the young that he too is – was – is young. He will not hold himself aloof. He will not frighten children.

He starts his work and his feet are rainbows. When he treats children he sits next to them on the floor. Instinct rather than ideology guides the new doctor: he needs to be close; he wants to do away with barriers.

On his very first day, the ninth of April, 1972, the new doctor delivers a baby, a little girl. He becomes a long-term friend of the new mother. Every April ninth he remembers and often contacts the ‘baby’ – long after she grows, graduates, becomes a musicologist, a linguist, a creator of Aboriginal dictionaries.

He keeps changing his colourful socks but he does not change his ways. So long as his patients are, for the most part, young, the thin membrane that separates doctor from patient suffices for safety; the blurring of the professional and the human nurtures both the doctor and the doctored.

A young mother passes terrifying nights seated by her firstborn, watching him, willing his breathing as he gasps his inbreaths and wheezes his outbreaths. She brings the child to the new doctor. His concern comforts her. In time the boy’s asthma improves. The doctor meets and treats all three of that young woman’s children. He is drawn to the three, the thin boys gangling, the coal-eyed little girl, a faun. The children do not fear him. These too he befriends.

A few years pass and the young parents bring Grandfather to the doctor. The young family have taken the old man and Grandmother in to their home, thoroughly alarmed by the pneumonia he narrowly survived during the previous winter. Sixty years previously that man survived gassing in the trenches. His lungs are ruined, he might not get through another winter. Would the young doctor resume his care? He does, and further friendships grow.

The father of the asthmatic boy likes to run. He’s a graduate in Architecture, a landscape artist who turns to teaching maths. He teaches at a school fifteen kilometres distant. Sometimes he runs those fifteen kms, up and down hills, across a couple of creeks to the school in the valley. The teacher shows his doctor friend the secrets and joys of running sandy country tracks. Up hills they run, sharing vistas of white, off-white, pale grey, deep grey, their breath white in the frosty mornings. Summer sees the two up and running before the heat strikes. Sweat-born raptures bind them in close friendship. The doctor showers and dresses for work in the en-suite bathroom of the aged matriarch. He tiptoes past the old lady lying asleep in her bedroom, greeting her after she has awakened.

Years pass. Decades pass. All are older now. The Medical Board sends letter after letter to doctors, warning them to keep proper distance from patients. The Medical Board has never had the pleasure of being a country doctor. The doctor wears his garish socks still, unconsciously. He knows by now the byways of health, the pathways along which he and patients alike, stumble; ways that lead slowly or rapidly towards the universal destination. He knows his own vulnerability to the pain of others, the sorrows that seep through a thin membrane; and the power of hope to seep osmotically back. He knows too the cases where hopes of cure are cruel illusion. He seeks in these cases to be a guide, to keep company with his patient his friend. That a friend not pass, lost or alone, into finality.

The running friend becomes unexpectedly breathless. Time passes and he cannot catch his breath. Tests show a shadow on a lung. Other tests reveal a tumour in the bowel. The years of torment begin. Surgery, chemotherapy, surgery again, scans and biopsies that show a third disorder, a serious chronic lung inflammation, nemesis now of three male generations. The teacher painter architect runner friend – what word can encapsulate a human person? – must take strong steroid medicines to stay alive, to breathe.

The breathing man works on a new painting. He paints a square-rigged ship negotiating a strait. He paints the ship then repaints it. His work reaches no finality. He shows the work to his doctor friend, who comes – as he used to in the running days – for breakfast. That’s a sound in New Zealand, a fiord really. It’s called ‘Doubtful Sound.’ Captain Cook came to the entrance, felt uncertain whether he’d get ‘The Endeavour’ out if he were to enter. He felt doubtful and he named the place for his doubt. 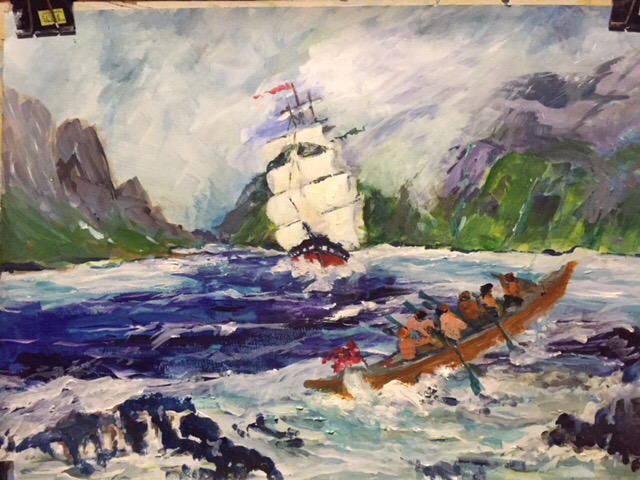 The painting shows a tall ship heeling before a strong wind. Its bow points bravely into the wind. The wind bears it towards the reef that guards the mouth of the sound. The rocks are a maw, open, baleful. The sails are close rigged. This is a ship under strain. Relieving that strain is a smaller boat whose heaving oarsmen pull the larger one towards safety. The doctor looks at the picture doubtfully. He was raised on boats. He’s negotiated dangerous narrows, but he had a motor to see him through.

That small boat, that’s a whaler. I used to row boats like that as a boy, on the Thames. In earlier times the master of a square rigger would launch the whaler to sound depths, but also, to help the mother vessel in places where the going was tight. When he felt doubt that he’d make it through.

The cortisone voice crackles, phrases punctuated by breathing pauses. The creator looks at his unfinishing work. Artful brushstrokes of blue, of greys, of white, create waves, wake, bow-wave. The ship holds its own. In all the stresses and forces it has not reached finality.