Wilson’s Promontory – where the Australian mainland gropes south towards Tasmania and the Pole.
Wilson’s Promontory – in whitefella parlance, “The Prom”; to blackfellas, “Wamoom” – a place too special to live in, reserved for ceremony.
The Prom – a place sacred to whitefellas who do not reside there, vacation nomads.
Wilson’s Prom – where generations come and keep coming, where they need ballots to winnow the applicants; we who apply – we are the grass.
Wilson’s Prom – where four generations of my family have wintered and summered, most of them beyond remembering.

Some of my family spent this (prolonged) weekend at the Prom, both saplings and old growths, across the generations and down: two grandparents, their niece from Boston, her two children, the three children of our firstborn – all of us in that heightened state of aesthetic rapture as rugged mountains meet a moody sea.

We hiked and climbed great rocks, we jumped from them onto sand that squeaked, fell from them and upon them. We collected water from a mountain spring, we crossed small rivers and we peed into them, we ate and we ate, we read stories from the Jungle Book, we played chess and Scrabble and board games.
Screens were eclipsed.

Five young children from two different continents, different lives, met and blent, and were Australian in the special way that occurs ‘in country.’

Ten years ago, I wrote a poem here, memorialising a whale and my father, then one year gone.

My father walked these hills and steeps;
Woke early ever, walked rugged rock-strewn track
To the lookout and back. Now he sleeps
Forever; and I rise with the sun
On this second day of this last new moon
Of the dying year,
And sound the shofar, the ram’s horn warning,
Then go for a run on a crystal morning.

My father walked till his dying year; I follow his track
Across the bridge,
Then up the hill and over a ridge –
Then back; pausing to view a sapphire sea.

High here, on air, at Wamoom, this southern
End of a continent,
Comes remembrance, a fifth element.
Midst earth and water I stand, content,
Basking in the gentle fire of an early sun,
Then turn
To start the slog and gasp and sweat – up hills
And tracks on the ridge of the returning run.

‘Stop!’ – cries the voice of my companion –
‘And turn!
And look out to sea, and see – there’s a whale!’
I stop and turn and look – and sight the sail-
Shaped fin, the hump of back, the mammalian
Brown-black, a bruise
On the blue face of the sea. Now it sinks again
And as I smile, give thanks and muse
It surfaces and plays, and sprays its spume
At the end of the dying year.

Another whale was here, beached, dead; while with my father
A decade ago, I saw it. We paid homage at its sandy tomb. 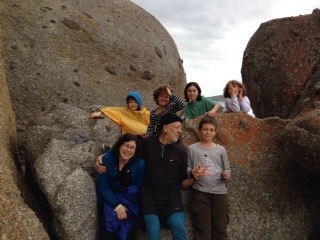